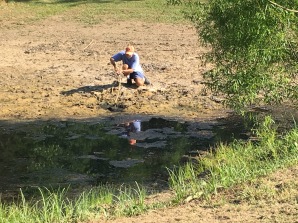 Hi friends and family!  We hope this post finds all well in your worlds. We are sending loving support and positive energy to anyone dealing with difficulties right now.

Kenny and I wish to share an amazing day with you.  It was an almost spiritual experience and a day full of wonder and happiness.

We arrived at a Cathedral Caverns State Park in Woodville, AL which is near Huntsville. Although not on the top ten of best things to do in AL (which it certainly should be!!), when I saw a brochure in our campground in Lillian, I was hooked.  With a bit of cajoling, Ken was on board.

The trip there was uneventful except for a “run-away-train” ride down a hair-raising decline that brought us to the park (route 431).  That is a story for another day.  But, RV buddies should take note to ensure that your trip there is coming in on an RV friendly route.

Surprisingly, aside from a ranger and his family, Ken, Uma and I were the only campers in the RV park.  The ranger helped us to get settled and provided us with information on the tours for the following day.  What a treat, he was actually going to be our tour guide!

On Thursday, we decided to sleep in and got tickets for the 11:00 tour.  Upon arrival, you feel quite small in the grand scheme of life – the entrance itself was incredible.  I am no longer concerned about squeezing through tight spaces. The ceiling of the entrance is 25 feet high and the width 128 feet wide.

Stepping into the twilight of the cavern, we began our journey with an introduction by our new camping buddy providing the history of this wonder of nature to the group of about 20 people.  Some basic background included history of the Cavern.  When the cavern was first commercialized, researchers found artifacts dating back as recent as 200 years ago to as long as 9,000 years!  The rock formations themselves are millions of years in the making.  Hard to fathom, right?

The temperature within the caves is rather pleasant especially with the heat of the day we visited and stays between 58 and 60 degrees year round.  An eight foot concrete pathway with handrails (as needed) meandered through the rooms and affords all visitors the ability to enjoy the radiance each new “room” provided.  You had to duck in several places but you didn’t have to crawl through tight quarters.  Strategically placed artificial lighting glorified the treasures each room held.  It is impossible to paint a vivid picture of the magical rock forests we explored.

The tour, lasting almost two hours, was resplendent- intricate rock formations carved out by Mother Nature over years of water running over limestone.  Each “room” we entered resulted in ohhs and ahhs that one couldn’t contain.  Our guide was a long time “caver”, researcher and actually quite entertaining.  He had scientific, historical and colorful stories about the Cavern.

Some highlights of the tour were:

and, the Piece de resistance (sorry I don’t have a French font)

Entering the room which holds the Cathedral in darkness, our guide hits a switch.  The entire crowd gasps – the view is stunning – so spiritual – these are the words that came to mind while drinking in the rock formations that appear to present our group a large cathedral including an altar, church bells, an organ – the beauty of this room cannot be comprehended unless you are in the physical presence of the Cathedral.

Part II:  Hiking in the State Park (See Ken’s picture above taken at the junction of all trails.)

Upon returning to our site, we changed to hiking shoes and headed off to nearby hiking trails within the park.  We took on several moderate hikes which added to our needed Fitbit steps, always a feel good thing.

After lunch, we took Uma for a walk though the primitive tenting/camping area.  For non-campers, primitive means there is no electricity, no water, no toilets – primitive! This area has some very large, private sites but, again, there were few people camping.

As we walked by the pond, splashing water caught our attention so we explored more closely.  A rather large bird, we think a raven, was stuck in the mud along the edge.  It was up to its breast but both wings were free.  As he flapped and struggled, we knew what had to be done.  Captain Ken to the rescue!  Action was required quickly as the poor bird was so tired that he went under the water several times each time struggling back to the surface by flapping its wings.

Initial attempts weren’t effective at all.  Ultimately, Kenny found the perfect Y-branch that he was able to gently maneuver in front of the raven, taking on the weight of the bird.  Carefully, placing another branch in the thick mud, the bird was able to grasp it with his feet to perch and rest.  Being the size of a big chicken or rooster with thick mud weighing it down, it was very difficult for Kenny to provide enough to leverage to pull the Raven out.  It was crystal clear that the bird was counting on Kenny to save him and clear to Kenny that the bird wanted his help.  Their eye contact told all.  A clear man/bird bond, there was not a chance that either would give up.  They were working together.

With a grand effort on Kenny’s part and a very grateful bird, he was released from the mud and flopped on to semi-dry land where he laid, out of danger but clearly without energy.  As we were uncertain whether he had injuries, we left him there to gain his strength.  We returned about 30 minutes later to check on him and were so happy to see that the Raven was up on the hill in the camping area walking/hopping around, preening his wings, getting the mud off.  He was fine!  Great rescue Kenny!!  What a rewarding occurrence!

When we returned to our site, we chatted with our ranger/camping buddy/tour guide and the subject went to bats.  He and I are batty about bats!  He told us about a cave nearby that housed about 200,000 bats and gave us directions.  It was dusk and they would be heading out to feed soon.  We immediately hopped in the car and headed to Sauta Cave National Wildlife Refuge which was about 10 minutes away.  So, at the end of our idyllic day, we watched the exit of over 200,000 bats – off to begin their hunt for dinner.  (Lessons learned:  bring an umbrella or wear a raincoat with a hood.)

What a full, glorious, exhausting day!  It goes down in history as one of the best days of our lives.  We are so grateful that we are able to be on this journey.

Until next time, we raise our wine glasses and toast to you:

Never lie, steal, cheat or drink.  But if you must lie, lie in the arms of one you love; if you must steal, steal away from bad company; if you must cheat, cheat death.  And, if you must drink, drink in the moments that take your breath away.  Anonymous – a variation of an Old Irish Blessing

3 thoughts on “One Very Fine Day”