Hi again friends and family!  We hope all is well in your worlds!

As noted in our last post, Bill & Jackie arrived and the week of their visit went by in a blur with the blending of both relaxing and fun adventures.  It was wonderful to see them again.  We (all) were a bit skeptical regarding our tight quarters but nothing to be concerned about there.  After all, we have shared much smaller space bc (before children) when we camped together in Charlestown, RI, in a tiny Shasta.  Brought back some great memories.

The KOA on Pine Island was pretty empty.  We were told that the Snowbirds usually left by the end of April.  The remaining campers called themselves the Survivors and lived there year round.  Pine Island is their home and they appear to be very happy living there.  It certainly is a great place to be!

The Survivors knew each other too well and their banter and teasing was entertainment in itself.  When in the pool, you can’t help but hear what everyone was saying so you had to get engaged in their silly conversations.  The four of us felt welcomed into their circle of friends.  All came to the pool with their noodles and floated around.  The first time I went there I thought I was interrupting a water aerobics class but they just laughed when I asked that question.  They said if it was, the leader wasn’t moving.

The temperature ran 80 – 90 degrees during our stay so the pool was refreshing and there was a hot tub as well.  We were told by the survivors that when the snowbirds were all there, the camp was hopping with crazy, fun activities but our time was very low key, quiet, and relaxing.  On our particular site, we weren’t allowed to have a camp fire but we were allowed to use the community fire pit by the pool which the four of us enjoyed.

When our friends from Palm Coast, Susan and Mark A., heard that Billy and Jackie were coming they made plans to join us on the weekend.  So, of course, it was time to select some fun activities.

A trip to the KOA laundry provided us with rows of brochures showing us various unique things to do in the area.  On Saturday morning, the six of us headed to Captain Steve’s Swamp Buggy Ride.  (Take a peek on line to see the website: captainstevesswampbuggy.com)  When speaking with him on the telephone, he made me promise that I would bring him a sandwich “and not a wimpy one either – did you see the size of me on our website”.  So, we were a bit surprised that our guide wasn’t Captain Steve but a member of his family, Victor.  Oh well, we ended up with more food for us to eat.

This particular swamp buggy tour is mentioned in Travel National Geographic as a must do.  Big Cypress National Preserve is 730,000 acres of freshwater Big Cypress Swamp and a place where you wouldn’t want to get lost or be in after dark.  Too many critters running around at night.

Our adventure was about a 3.5 hour swamp trip seeing whatever Mother Nature intended for us to see.  The buggy, running on tractor tires, stood about eight feet in the air – it was huge!  It is powered by a 1952 International 4-cyclinder engine.  Kenny was impressed with that although I don’t know what that means.  We loaded our cooler onto the buggy and off we went.  Although we didn’t see any panthers or bears, we saw numerous varieties of birds that I hadn’t seen before.  Susan, knowing all of them, provided us with their names and tidbits of information about each.  We were blessed with spotting three baby (yearling?) deer without their Momma and several alligators ranging from two to eight feet.  The ride brought us by all types of fauna and flora including huge blooming air plants.

Beginning of swamp – water is our path

And, along the way, Victor provided us entertaining tales of other trips and information on swamp country.   We were in the middle of no where and if the buggy had a breakdown it would be several hours before any help would be able to reach us.  No worries – no breakdowns.

Okay, so we didn’t see any bears or panthers but we did get the opportunity to DRIVE the buggy!!  Of course, all six of us wanted our turns.  And, it wasn’t like we were driving in a straight line on dry land.  We were driving the swamp on fun winding trails!  And before going back to our car, Victor put the peddle to the metal to show what the buggy would do.  Some mud flying – but who cared?  It was great fun to drive the buggy!  Honestly, I thought that was the best part of the trip.  Notice that a picture of Kenny driving is from within the buggy – there was no way any of us were getting out of the buggy to get a better shot.

On Sunday, Mother’s Day, I was a bit nostalgic, thinking about my traditional Mother’s Day which was kayaking down the Farmington River with Zoe, Aaron, Tristan, Dylan and Nikki and Dan.  I was a bit downcast until I spoke with Zoe and Nikki.  Both said the weather was bad, cold and dreary and, if I were home, we would never have gone kayaking in that type of weather.  I was almost happy to hear that.

This Mother’s Day, Bill drove all of us to Santibel and Captiva Island.  We went shelling at Lighthouse Beach.  There were millions (truly millions)  of shells to choose from.  Of interest, in one area, there were hundreds of conch washed up on the beach.  Those that appeared to be alive, we threw back in the ocean but we found out later that it is probably something they have adapted to over the years so they would have survived.  But on that day, I picked up several of those that were all dried up on the beach thinking they were dead.  I may have saved some but I may have been the murderer of others.  I definitely threw more back than I took.  In any case, I have a guilty conscious about that particular activity.

We had a late lunch on Captiva Island at the RC Otter.  We had wanted to go to the Bubble Room since everyone had raved about it but we were too late for lunch and too early for dinner.  RC Otter served up yummy lobster bisque and great Reuben’s.  All-in-all, made for a pleasant and satisfying Mother’s Day.  Of course, hearing from all three daughters madefor the happiest moments of the day.  We hope that all Mothers, of both children and animals, had a great day!

Our final adventure with Bill & Jackie was a trip to Seminole Casino where Bill & Jackie went home ahead of the game and Ken & I broke even.  Of course, Ken & I had to play the Game of Thrones slots.  With special bonus pop-ups, who wouldn’t want to play it?

Sadly, Bill & Jackie left Tuesday morning so it was back to K, D & U.  We are very much looking forward to future visits with the whole gang.

Because I missed kayaking, Ken & I rented a kayak on Wednesday.  We paddled out seeking dolphins and Manatees (which you can usually see in this location) but we didn’t see any.  We thoroughly enjoyed the calm waters as we paddled through the mangroves watching the antics of a variety birds (where is Susan A. when we need her?) that make their home in the area. 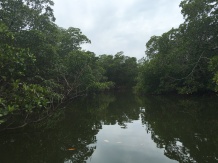 We spoke with our youngest daughter, K-T, on Mother’s Day and she asked us if we were ever going to leave FL.  We both laughed at that – we stayed longer than we had intended to, but, why rush through things when we are having so much fun.

But now it is time to head southwest.  We anticipate traveling along the coast of Alabama no later than Saturday, Sunday, Monday or whenever.  Retirement has had us adapt to a rather flexible schedule.

Until next time, we raise our wine glasses and toast to you:

Always do sober what you said you’d do drunk.  That will teach you to keep your mouth shut. –   Ernest Hemingway